While I had visions of tender, delicious smoked salmon as we had remembered it from Ted Peters Famous Smoked Fish, it didn’t quite hit the mark, so I learned a few lessons the hard way.

How  Do I Smoke Salmon?

First, I referenced the handy smoking guide that came with my Brinkmann Smoke ‘N Grill bullet-style smoker. That gave me a 2-3 hour cooking time, plus some seasoning suggestions. I also researched online and found quite a few instructions for smoking salmon, and even more seasoning ideas. I decided to keep this simple, and proceeded to get started.

First, the filets were thawed and rinsed, then placed on a pan, skin side  down, to air dry for 30 minutes. Afterwards, they were lightly salted. Rather than use any fancy seasoning mixes, I opted to just rely on salt and smoke for flavor.

While the salmon was drying, I started soaking a few handfuls of alder and apple wood chips. They typically need at least 30 minutes to absorb some of the water. 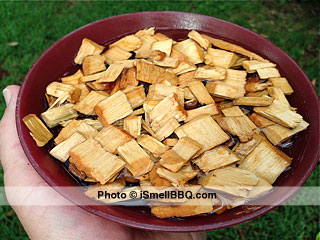 About half a pan of charcoal was poured, then the center section was carefully removed and started in a charcoal starter similar to these models.

These are really convenient, as they allow you to use paper rather than lighter fluid, so there’s no risk of adding unwanted flavors to the charcoal, and therefore, your fish. Also, they prevent the other charcoal in the pan from starting too early. I highly recommend them.

This method of setting up charcoal, by the way, with only the center portion started, is a technique for making it all burn longer by delaying the start of the outer coals. Eventually, they all do burn, but slowly, from the center outward.

Load Smoker and Tend to the Process

I smoked these salmon filets on my Brinkmann Smoke ‘N Grill bullet-style smoker. The charcoal pan sits in the bottom of the unit. Above it is the water pan, to which I added one whole lemon, sliced, so it would steam a little flavor up through the salmon filets. Those filets, by the way, were placed skin side down on two wire grills directly above the water pan.

With everything in place, instructions for smoking salmon are pretty straightforward:

And dinner is served. However, it was far from perfect.

I did several things wrong, which I’ll detail here so you can avoid them when trying this yourself:

The next day, we pulled out the leftover filets, separated them into bite-sized pieces, and tried them cold, on crackers with cream cheese.

Wow, what a difference. We couldn’t stop eating them.

So my mistakes the day before didn’t carry over to day two, which was quite a relief. Two great lunches made up for a so-so meal, and we were all very happy. So happy, in fact, that my oldest daughter swiped one while I was taking photos!

Checklist for Next Time

When I figure out how to smoke salmon at home, AND have great results that match or exceed Ted Peters, I’ll create a permanent page on the recipes menu, above. Until then, it will be a trial and error process to get this right.

Have I overlooked anything? Do you have suggestions for my next attempt. Just comment below.