Hello, I’m Bart and I love true southern smoked barbecue. Pulled pork, chicken, ribs, and beef brisket, as well as smoked salmon, mahi mahi, and other fish. I also love all kinds of grilled food – anything over charcoal. That’s why I’m here, sharing what I’ve learned about how to get good barbecue – actually, great barbecue – whether smoking or grilling it yourself, or seeking out restaurants that are “doing it right.”

I’m just an average guy who craves the aroma and flavor of seasoned meat cooked over real wood coals. However, the term “craving,” in my case, refers to such odd behaviors as hovering over a plate of meat and inhaling deeply, over and over again, never getting enough of its aroma. 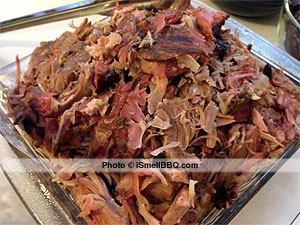 Or slipping into a euphoric moment when driving through the smoke trail from a really good barbecue restaurant. Even when I’m stuffed to the gills and putting extras in the fridge, I just can’t inhale enough of it. Hence, the name of this website: iSmellBBQ.com.

Some may consider this behavior strange, but if you’re getting the same craving just reading this, then you know exactly what I’m talking about – and that’s why you’re here. Not to be cured, but to feed your desire for the ultimate barbecue. I’ll do my best to convey everything I know.

I’m not a professional, though. I don’t even compete in barbecue competitions. I just prefer the combined taste of meat, seasonings and smoke, and I tend to learn too often by making really bad mistakes. Look around here long enough, and you’ll find a few. I do learn, eventually, though.

When moving from central Indiana to central Florida in 1988, I thought I knew what barbecue was. I didn’t. My first exposure to it was at a Sonny’s Real Pit Barbeque (www.sonnysbbq.com). I know… You serious southern barbecue fans don’t think much of Sonny’s, but stick with me for a minute. When the dinners arrived, I took one look and asked “where’s the barbecue sauce?” So naïve! Then I tasted some smoke, and I was hooked. So, Sonny’s gets credit for whetting my appetite for more.

You see, up until that point in my life, barbecue meant grilling some ribs or chicken, baking some sauce on during the last 10 minutes, then calling it barbecue. While there’s nothing wrong with this (I still do it, occasionally), it just isn’t true southern barbecue. It’s grilling. They’re two entirely different methods of cooking the meat, and produce entirely different results. Both can be good, but only one has that rich, smoky flavor.

Since then, I have smoked a lot of meat in a bullet smoker, and even more in an offset model (which I still don’t have the hang of, yet, and probably won’t, from what I’ve read about them). I’ve also tracked down a few restaurants that are “doing it right.” In other words, now I know what great barbecue is.

Keep in mind, however, that my “great” barbecue may not be all that great to you. This is because barbecue is highly subjective. What’s perfect to one person may be too spicy, or too bland, to someone else. That’s okay. If there was one perfect style that pleased everyone, then we wouldn’t be enjoying all of this variety. Let’s respect our differences and remain friends.

Read what I have here, keep what works for you, then seek out other sources, as well. Eventually, you’ll have your own technique that works best for you. Most importantly, savor every sweet, smoky bite.

And don’t forget to savor the aroma, too. Never forget the aroma.